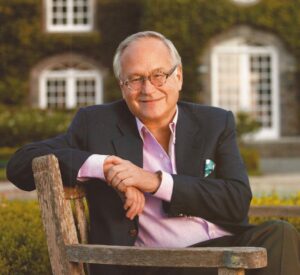 Bryant attended Brown University’s Program in Medicine and received his degree in 1976. He married Jill Sifton Henderson, the love of his life, in 1977 and they moved to Boston where Bryant began his six-year residency in General and Plastic Surgery at Massachusetts General Hospital. In 1983 Bryant was awarded the Kazanjian Fellowship in Surgery that enabled him to pursue craniofacial surgery. He selected Paris, under the tutelage of Dr. Daniel Marchac, one of the few masters of this specialty, to pursue craniofacial reconstruction at the Center for Craniofacial Surgery at Necker Enfants Malades Hospital. Dr. Marchac became a cherished mentor and lifelong friend. While living in Paris, Bryant and Jill developed their love of travel exploring Europe from corner to corner. Therefore, it was only natural that he frequently attended EURAPS meetings and had many friends among European plastic surgeons.

In 1985 he co-founded the Pediatric Craniofacial Department at UCSF-Benioff Children’s Hospital Oakland that he modeled after Dr. Marchac’s Center for Craniofacial Surgery in Paris. Bryant established a department where multidisciplinary specialists could convene to provide the level of care needed to effectively treat children born with craniofacial anomalies. He was the Chief of Plastic Surgery at UCSF-Benioff Oakland for nine years and at the time of his death was the Co-Director of the Craniofacial Department.

In 1987, Bryant established the Indochina Surgical Education Exchange (ISEE), a charitable program in Vietnam. The goal of ISEE was to teach their Vietnamese counterparts the surgical techniques they lacked so that they could provide long lasting and consistent care to the Vietnamese people who had been so ravaged by war.

Bryant was characterized by his colleagues and friends as “a connoisseur and a gentleman. He truly appreciated getting together with his colleagues and he was always helpful and supportive of all of us.”
He became fluent in Italian and taught in the country’s major plastic surgery training programs. On January 27, 2020 Bryant was awarded, by the President of Italy, the Ordine della Stella d’Italia, the highest civilian honor given by the Italian government for his 35 years of extraordinary contribution to the country.

His passing leaves many with a sadness.

This website uses cookies to improve your experience while you navigate through the website. Out of these cookies, the cookies that are categorized as necessary are stored on your browser as they are essential for the working of basic functionalities of the website. We also use third-party cookies that help us analyze and understand how you use this website. These cookies will be stored in your browser only with your consent. You also have the option to opt-out of these cookies. But opting out of some of these cookies may have an effect on your browsing experience.
Necessary Always Enabled
Necessary cookies are absolutely essential for the website to function properly. This category only includes cookies that ensures basic functionalities and security features of the website. These cookies do not store any personal information.
Non-necessary
Any cookies that may not be particularly necessary for the website to function and is used specifically to collect user personal data via analytics, ads, other embedded contents are termed as non-necessary cookies. It is mandatory to procure user consent prior to running these cookies on your website.
SAVE & ACCEPT