Scope of the Scholarship 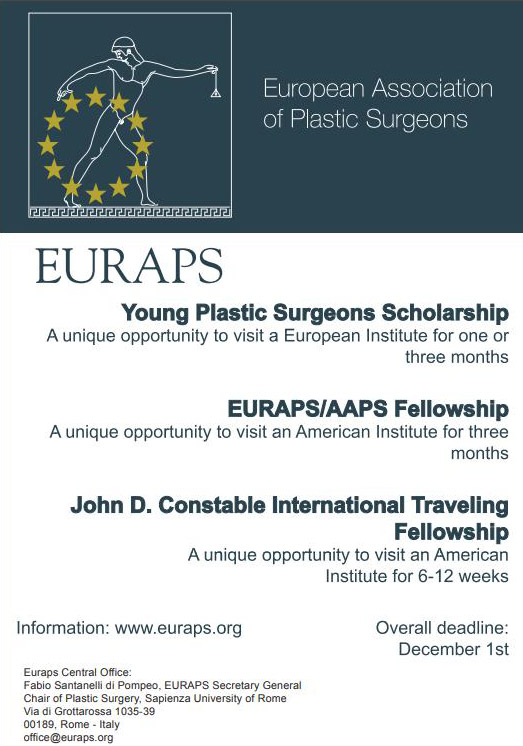 Five scholarships are awarded every year in order to foster and encourage training in Plastic Surgery across Europe. These Scholarships provide a one or three month experience to be spent in a European department of plastic surgery, or in a centre run by a EURAPS active member, included in the list of Institutions.

Candidates must be European citizens (Eastern European Countries included) and have obtained the specialty in Plastic Surgery (or Board). The maximum age is 37 years. Evidence that candidates have not had their 38th birthday must be submitted (photocopy of passport).

The following documents must be sent to office@euraps.org before December 1st, each year:

1. Letter written by the candidate indicating the purpose of his/her visit and the Department(s) where he/she wishes to spend the Scholarship
2. C.V. + proof of thesis (ISBN-code, if available)
3. Letter of recommendation from the Sponsor (EURAPS Full Member) illustrating the choice of candidate

A four-Member EURAPS Committee, appointed by the General Assembly, will consider and select the most worthy applications.

The scholarships must be used up before the end of the following year, and must be spent in a European department of plastic surgery, or in a centre run by a EURAPS active member, included in the list of Institutions.

The EURAPS Secretary General will write to the head of the Institute(s) to be visited, recommending the successful applicant(s).

Recipient(s) of the EURAPS Scholarship will be supervised by the head of the Institute who will prepare a confidential report about the candidate’s attendance and interest on the Institute’s activity. The report will be sent to the Secretary General of EURAPS at the completion of the Scholarship. A copy of this report will be forwarded to the recipient’s sponsor.

Any cookies that may not be particularly necessary for the website to function and is used specifically to collect user personal data via analytics, ads, other embedded contents are termed as non-necessary cookies. It is mandatory to procure user consent prior to running these cookies on your website.